For years California and the city of Oakland have struggled to provide adequate and affordable housing to its residents. As a result of these housing challenges, the state struggles with high rates of homelessness. As of 2019, twenty-seven percent of the United States’ homeless population (approximately 151,278 individuals) was located in California. Oakland has a homeless population of 4,071, a 47 percent increase over the previous two years, making up over half of Alameda County’s homeless population.

California also has the country’s largest share of people experiencing unsheltered homelessness at 72 percent. These individuals often create makeshift forms of shelter in “encampment sites, but the people who live within them can face sanitary and health problems as sites grow larger and go without the necessary resources to deal with personal hygiene and hazardous waste removal. In 2019, Oakland had 41 and 13 percent of the homeless population living in tents or on the streets respectively.

To address its homelessness epidemic, the city of Oakland created the Community Cabins Program, an initiative that relies on the thoughtful use of data and participation from the local government, citizens, and private organizations to help combat unsheltered homelessness. Launched in 2017, it began officially operating in October 2018. The program complements the work of service providers who intensively work with people to help end their unsheltered status and is designed to serve as an effective and compassionate intervention, focused on increasing peoples’ health, stability, dignity, and safety. This case study describes how the “Oakland Community Cabins” program was developed and what it has accomplished to date to help combat one of its community’s largest problems.

The Community Cabin Program is designed to serve as an emergency intervention, providing professional services and a safer and healthier alternative to encampment sites and other unsheltered living situations. The program is run and managed by Oakland Human Services Department and is a part of the city’s larger response homelessness response. Each cabin site (see photo below) typically contains 20 prefabricated cabins each housing two people at a time, meaning each cabin site serves about forty people at a time, and provides program participants access to numerous amenities and accommodations. Sites provide residents privacy, security, sanitary services, electricity, a community television and microwave, water, and food. Additionally, residents are permitted to bring their pets to live with them. Program participants receive a myriad of social services to help end their unsheltered status and promote wellbeing. These services include healthcare, access to other homeless services, assistance securing benefits and a personal ID (such as a driver’s license), and job search support. The Community Cabin Program serves as a part of a larger housing strategy adopted by Oakland (discussed in further detail in the Policy Significance section).

Each Community Cabin location is strategically picked as a response to public health and safety hazards at existing large encampment sites in Oakland. When these cabin sites are developed and open for program participants, encampment sites in the area are then closed. The cabin sites are built in these areas to provide an alternative to the unsheltered, filled with resources to combat the public health and safety hazards that persist at some large encampment sites. The replacement of these sites with the Community Cabins has resulted in local businesses and residents seeing that the tiny homes make a difference in providing shelter to a vulnerable population. 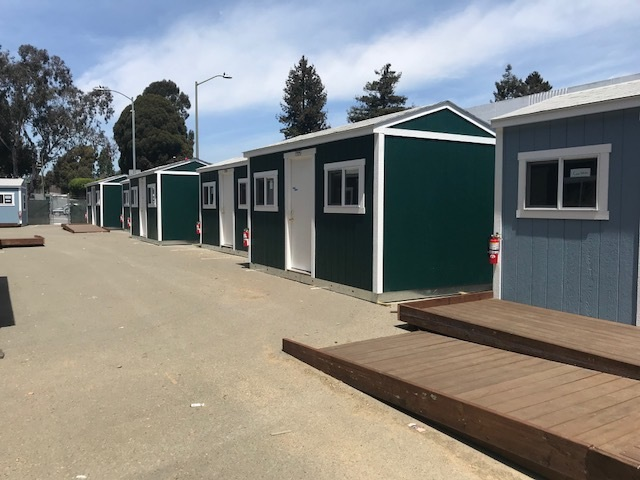 How the cabins are built and funded

Once a community cabin site is approved, it typically takes four to five weeks to build the cabins and for the site to become operational. (For more detail on how Oakland obtains the land the cabins are built on be sure to read the “Process” section.)

The cabins are funded by private organizations, the city, and by donations from Oakland residents. The Oakland City Council’s 2019-2021 budget also included $32 million in funding for homeless services to expand existing homeless programs, including Community Cabins operations. The upfront development costs are calculated to be about $308,000, but the cost to the city for the development of the cabin sites is almost zero because the program is primarily funded through philanthropic and in-kind donations.

Partnerships with local and private organizations are crucial components of the success the Community Cabins have experienced. Private organizations such as Target, Home Depot, Sutter Health, Kaiser Permanente, and Clorox have provided monetary and in-kind support to make the development (and operation)of these temporary housing shelters possible. The program’s engineering, project management, and architecture fees were made possible through in-kind donations from the private sector, thanks to connections from the Oakland Builders Alliance. The first cabin sites had all the cabins purchased and donated to Oakland by Sutter Health, a health care network. Most importantly, the Community Cabin sites receive many volunteers and donations from the city’s residents. All of the Community Cabin sites are operated by local nonprofits such as Operation Dignity and the Roots Community Health Center, with the Housing Consortium of the East Bay serving as the lead operator for all the cabin sites.

According to research from the US Department of Urban Housing and Development (HUD) the rental market in Oakland has become extremely tight. From 2010 to 2019 the vacancy rate in Oakland fell from 6.6 percent to 3.4 percent with the average rent increasing by 3 percent annually. Oakland’s housing challenges are not a new issue for the city and the city has taken different approaches to address the problem. As part of her 2016 “Keep Oakland Housed” initiative, Mayor Libby Schaaf’s administration formed a housing cabinet that produced a 52-page report with detailed recommendations on how to offset housing pressures. The “Keep Oakland Housed Initiative” is designed to address homelessness at each step in the cycle: Prevent, Stabilize, House.

While the Community Cabins program was not initially included in the original 52-page report, Mayor Schaaf added it under the Stabilize step of the “Keep Oakland Housed” initiative during December 2017 when Oakland opened its Community Cabin pilot site with start-up funding from the Home Depot Foundation and the Oakland Chamber of Commerce. The pilot site had 20 cabins, and the site location was subleased by the city from the Bay Area Rapid Transit (BART) agency. This original site closed in December 2018 but has served as a template for the four community cabin sites that operate today.

Land for three of the existing sites exists on land leased to the city by the California Department of Transportation (Caltrans). In September 2018 Assembly Bill No. 3139, known as Bonta, gave Caltrans the ability to lease state highway property to Oakland for emergency shelter purposes for a monthly lease payment of $1.

In the first two years of the program, the cabins have served over 700 people, with more than 200 participants obtaining a driver’s license and 145 people finding employment. More importantly, 56 percent of the participants have exited to permanent housing or a longer-term program, and as of 2020, 41 percent of the total exits were to permanent housing. The program’s success and positive outcomes for its participants have prompted Oakland to continue to open up more Community Cabins sites throughout the city. So far a new community cabin site has opened in Oakland each year since the launch of the program, with a total of four sites offering a total of 232 beds available in 2021.

While there are many successes of the program, concerns have also been raised. Some Oakland Housing activist groups have argued that these two-person cabins are not a humane or adequate alternative to life on the streets. Additionally, the removal of encampment sites has been met with some public backlash, as it disrupts a community some of whose members do not or cannot join the Community Cabins. When these encampment sites are broken up, relationships and services individuals may have been receiving may be lost, and these individuals could be difficult to locate for services in the future. The location of some of the community cabin sites has also resulted in minor NIMBY backlash.

On the plus side, many city residents have found these cabins preferable to the large encampments they see near their neighborhoods and how these cabins are a better option than seeing people go without basic shelter. Moreover, residents have supported the program, and start-up costs for the most recent Oak Street cabin site were fully covered via donations by Oakland residents. The community cabin idea has even appeared in other states and jurisdictions such as Detroit, Michigan, and Syracuse, New York, to name a few.

The Oakland Community Cabins program seeks to address two of Oakland’s most pressing housing policy issues: advancing racial equity in housing and unsheltered homelessness. In 2018 Oakland released the Oakland’s 2018 Equity Indicators Report: Measuring Change Toward Greater Equity in Oakland. Oakland’s Equity Indicators Report found “Homelessness” to be the city’s lowest-scoring indicator, receiving the lowest equity score possible of 1. According to the city of Oakland’s research and analysis, “African Americans were 41.76 times more likely than Asians to be homeless” as 70 percent of Oakland’s homeless population is African-American.

Furthermore, the Community Cabin Program is one of Oakland’s most recent efforts to support the area’s unsheltered population. The program represents a cost-effective and resource-efficient policy to address the long-standing problem. Unlike previous policies and programs, this program demonstrates Oakland’s creativity by using public land and harnessing the power of community and private stakeholders to support the jurisdiction’s homeless population.

The program is also unique in that it not only addresses the immediate concerns of homelessness but also provides participants with support in other areas, such as education, unemployment, housing affordability, etc. Community Cabins helps to address these problems by not only providing shelter, but other resources that residents may not have access to.